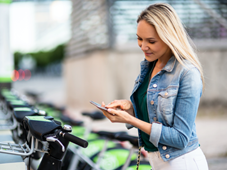 Below is an abstract of the white paper, Switch on Innovation: 5G and the Future of Smart Cities which explores how 5G is fueling excitement as design engineers, technologists, and urban planners ponder the extents and impacts of the technology. For the full white paper, download here.

Much of the technology focus in Smart Cities and 5G is on improved wireless communications, broadening sensor technology and energy efficiency, including devices that are completely battery-free. However, without suitable switches, be those tact, toggle, pushbutton or otherwise, 5G technology infrastructure, IoT, and smart-city applications would not exist as we know them today. Neither would they reach their future potential. Switches play the critical role of facilitating human machine interactions.

As just one example, short-term rental bicycles are becoming a hallmark of progressive smart cities. These bicycles are placed in key locations and users can unlock them (and start the billing cycle) using an app on their smartphone.

The smart locks rely on switch technology that include subminiature snap-acting switches that detect if the lock has been opened. These rugged components are subjected to hundreds of thousands of cycles and need to resist the elements to ensure that a patron can actually use the technology at hand.

5G is rapidly moving us into an era of increased sophistication and automation controlled by billions of small devices that will create huge amounts of data every second of every day.

These devices are found in our homes, offices, factories and hospitals, and in our smart-city infrastructure. This market hardly existed a decade ago and is already worth hundreds of billions of dollars annually. This staggering range of devices and applications all have one thing in common; they rely on one or more switches to be able to function.