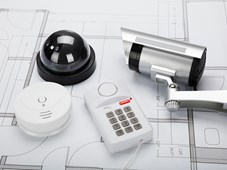 Companies rely on a wide range of security products when it comes to upholding the safety and well-being of people and property – and these products need to work continuously and flawlessly, every time. After all, there is no room for failure when the safety of people or the loss of property is on the line.

Safety and security (relative to both commercial buildings and residential property) means implementing products such as smoke and carbon monoxide alarms, fire alarms and sprinkler systems, intrusion alarms, video security, access controls and so on. These are all great first lines of defense against unwanted intrusions or unexpected disasters that could put people in harm’s way, but what good are these products if they simply can’t be turned on or configured properly?

High-performing, high-quality switches play a huge role to ensure any number of security products are going to work. Let’s look at a few examples of switches in action as defenders.

Smoke alarms and heat sensors save thousands of lives each year. They are amazing products that cost nearly nothing to mass produce, so it’s tremendously easy and affordable for companies to install as many as they need throughout their property. Smoke alarms fall into two broad categories - residential and commercial - with specific requirements for each application.

For residential alarms, it’s not uncommon for an alarm to go off without an actual fire (say, for example when you leave that loaf of bread in the oven too long). In such cases the test/reset button is used to silence the alarm. In addition, this button is also used to test the battery and to make sure the alarm is working properly. If the switch used under this button is faulty or works intermittently, there can be serious consequences beyond having to listen to a piercing siren. In 2014, 33 percent of false alarms that fire departments responded to were caused by malfunctioning smoke alarms. When the test and reset button fails, people rush to disconnect the smoke alarm, remove its batteries, and leave it to collect dust in a drawer because it’s too inconvenient to reconnect the system in a timely manner, all of which can lead to potential danger in the event of an actual fire. In addition to the test/reset switch, modern regulations on 10 year sealed batteries also drive the addition of a battery discharge switch used at the end of life on battery operated alarms. The use of a reliable switch can prevent the alarm from being re-used if the battery is low or the alarm is not functioning properly.

It’s important for smoke alarm manufacturers to develop their alarms using highly reliable switches designed to resist the harsh environments that can cause failure – such as dust, humidity, electrical malfunctions, etc. The less a test and reset button fails, the less number of smoke alarms will end up in the drawer.

Relative to commercial alarms, there is generally no test and reset switch as these alarms are typically hardwired into the building electrical system. However, these “communicating” or “networked” sensors need some way of identifying themselves to the main alarm panel. For larger buildings with hundreds of detectors, this is frequently done with auto-addressing using software. However, for smaller buildings the standard piano style DIP switch is still the most cost effective way to go. High performance DIP switches are also frequently used to configure the sensitivity settings for heat detectors. With newer technologies such as wireless communicating sensors, rotary (coded) DIP switches can be used to create unique addresses on the network. These switches need to work reliably under harsh conditions. In fact, in some areas (such as Europe) there are even newer regulations which mandate performance in the presence of corrosive gases such as sulfur dioxide. Designing a high quality, reliable switch into these products can have a big impact on the device’s ability to protect lives and property.

Many residential homes and almost any commercial building will have installed intrusion or security alarms to protect against unauthorized entry, burglary or property damage. Intrusion alarms come in all forms, shapes and sizes, depending on their intended purpose. Typical alarm components include: control panels, outdoor lights and sirens, as well as sensors for doors, windows, motion detection, etc. – and all need the proper switch for activation, configuration, and tamper protection or else they simply won’t work properly.

Tamper protection is probably the most important function required of switches in the security alarm market space. Alarm components such as operator panels and keypads typically use some form of protection to prevent the cover from being removed or the entire panel from being ripped from the wall. Outdoor components such as motion sensors, strobes and sirens also use switches to protect against tampering or disabling the device. These switches take different forms based on the mechanical layout of the device or the environmental requirements, but can include basic snap acting switches, tact switches, or miniature detect switches. In addition, the sensors used to monitor the condition of doors and windows may also have a miniature switch to guard against tampering.

Important considerations include miniature size, stroke or travel, and corrosion resistance. Switches can sit idle for months or years but then be called upon to conduct a low level current. Oxidized or corroded contacts can result in an alarm not functioning properly. Switches with inadequate travel or a low level of over-force protection can limit the flexibility designers have with the mechanical layout. Not designing a product with these requirements in mind can result in an alarm system which doesn’t adequately protect people and property.

DIP switches are also commonly used on alarm components to configure settings or assign a network address. Some examples include motion detectors and glass break sensors, network expansion modules, and main control panels. The switch size and design needs to be small enough to minimize space requirements on the PCB but also be easy enough for an operator to adjust without damaging the actuators. While cycle life requirements are not as high as with other types of switches, resistance to corrosion can be important given the operating environment as well as the washing operations used for surface mount soldering.

Video surveillance is a booming market, and it’s no wonder why – video security is used in all types of industries from retail, to education, to banking, etc. No matter what the industry, video security improves safety and peace of mind. Video cameras have been known to act as a deterrent to crime, help police apprehend criminals, improve productivity in the workplace and more. But these valiant efforts will go to waste without the right switch powering the surveillance camera in the first place.

Modern video security includes everything from standard PTZ (pan, tilt, zoom) cameras for CCTV, to IP cameras which allow a person to monitor what’s going on at home from their laptop at work, to the video intercom systems used in large apartment complexes, and even to miniature cameras found inside newer doorbells and smart door locks. These cameras use a variety of switches for setup and function settings. Miniature tact switches are used for menu programming and reset buttons. DIP switches are also commonly used on PTZ cameras for configuring baud rates and communication settings which allow the camera to communicate properly with the DVR or recording device.

Understanding the requirements for each device and designing in a switch with the right performance qualities can be the difference between the end product working as intended or not. IP cameras may need to be reset from time to time. The tact switches commonly used need to be small enough to meet the needs of shrinking form factors but also be robust enough to tolerate the user jamming a small object inside. DIP switches need to have crisp solid actuation and conduct low level currents in harsh conditions in order for the camera to communicate properly with the recording device.

Whether it’s a residential home or a commercial business, there is no question that modern safety and security products such as smoke alarms, intrusion alarms and video cameras play an essential role in protecting people and property against harmful situations – but the switches required to configure, operate, and protect these devices in the first place are an industry’s true line of defense.