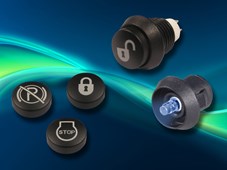 C&K Components, a leading global manufacturer of electromechanical switches, smart card interconnect devices, and high reliability connectors, has announced that they have added painted and laser-etched symbols to the backlit caps on the APB Series industrial pushbutton switches. Available LED’s in either blue or white, the backlit caps provide a highly visible indication that the switch has been activated or turned on. Additionally, since the LEDs are independent of the switching mechanism, customers can control the LED to indicate whether the switch is in the up (on) or down (off) position, and can even control the level of brightness. Ideal for joystick modules and control panels used in off-road transportation and construction equipment controls, in addition to a variety of other harsh industrial applications. The rugged, backlit APB Series switches feature an extended operating life of up to 1,000,000 cycles.

"In addition to the nine symbols we offer as standard parts, we also offer a fully customizable painted and laser etched cap capability that allows us to recreate virtually any symbol1 on the 12mm backlit caps of our APB Series switches. These switches are commonly used in applications located in poorly lit environments, which can make it difficult to identify individual switch function, so the backlit cap graphics will provide operators with a highly visible indication of what they’re activating before they turn it on,” said Lauren Catalano, Global Product Manager at C&K Components. Customers can now create symbols specific to their products and the functions its switches perform. The possibilities are endless.